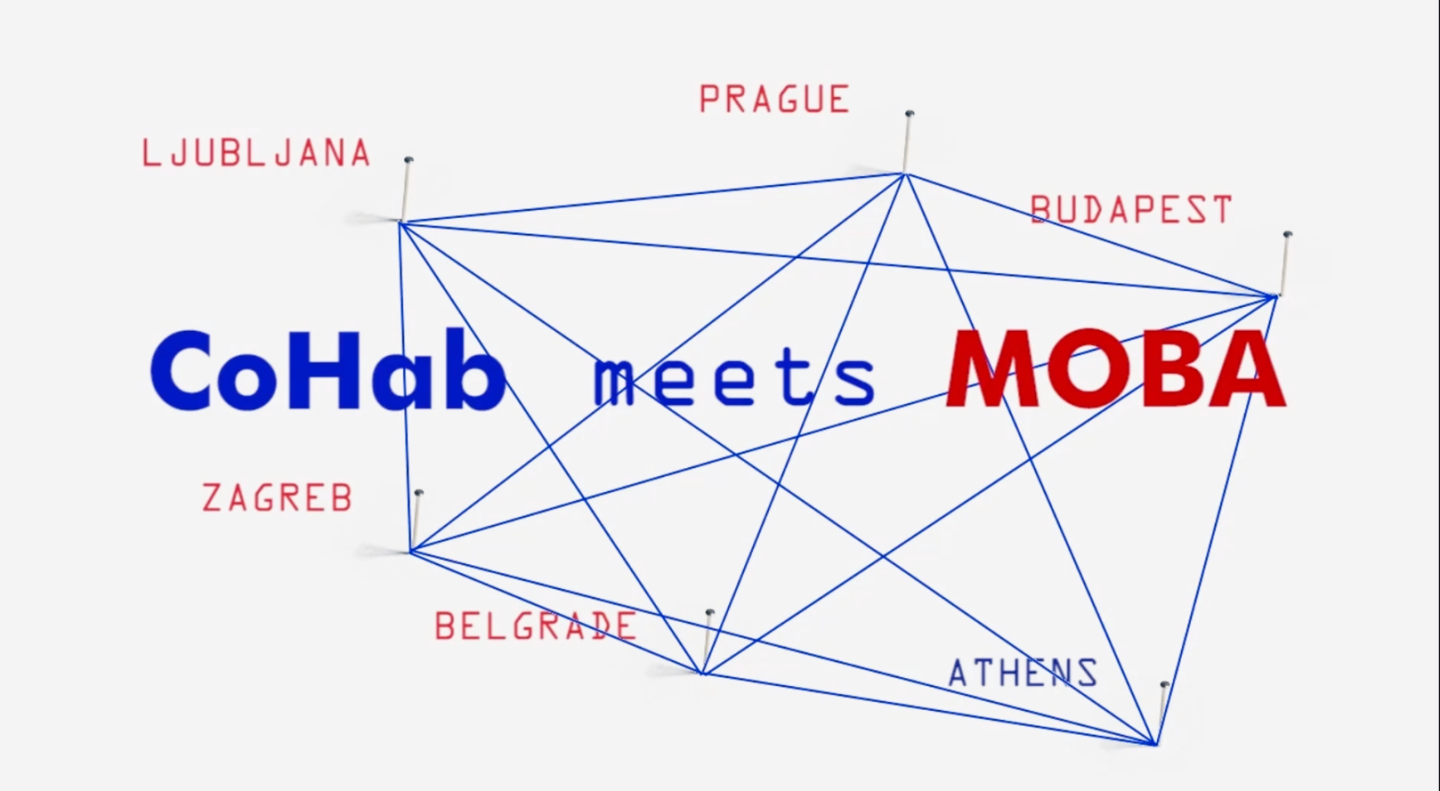 A knowledge exchange and networking project with MOBA network.

Co-Hab Athens, as a collective, we are particularly inspired by the fact that the members of the MOBA Housing Network have developed and started implementing pilot cooperative projects in Central and South-Eastern Europe, where lack of collective housing solutions and public housing policies are a common challenge as in the Greek context. MOBA has been registered as a European Cooperative Society in 2020 and was initially formed in 2017 by 5 housing cooperatives of Central and South-Eastern Europe. Its 5 members include:
– Zaduga za etično financiranje (Cooperative for Ethical financing), Zagreb
– Ko Gradi Grad (Who Builds the City), Belgrade
– Rákóczi Kollektíva, Budapest
– Sdílené domy (shared houses) Prague
-Zadrugator (Ljubljana)

We have been following the efforts of MOBA since its initial steps, and through this project, we aimed to strengthen our connection with the MOBA Network and exchange practical knowledge with its members.

Our knowledge exchange project, was planned to happen as real visits to each inititative, but due to covid restrictions the whole project moved online. In early 2021 we made a series of video discussion- interviews with key people from the participating cooperatives, in order to better understand how they’re working towards implementing collaborative housing projects in their respective cities, discuss their challenges, and ways that those are being overcome.
The video-interviews presented here, will be complemented by a hybrid workshop on 4th June, which will happen in Athens and where people and groups interested to build their own project will have the chance to explain the local context and get input and ideas on addressing specific challenges from the invited MOBA members.

The knowledge exchange program was funded by
FundACTION RETHINK grant 2020.

Ko Gradi Grad (Who builds the city) started through an open call back in 2010. From the invitation to publicly discuss urban realities in Belgrade through the method of working tables, gradually the idea of cooperative housing started to take shape. A contest by a local Belgrade municipality in 2014, which was won by the group enabled them to further develop the idea and make it more concrete. However the contest was never realized, thus pushing them to proceed with the project on their own. They have registered Ko Gradi Grad as a non-profit on 2017, focused on advocacy and Pametnija Zgrada (Smarter Building) as a housing cooperative, on 2019, to serve as the implementation scheme. Through their research they have developed two preliminary designs for their pilot project as well as an open source tool for calculating costs, which is also available on MOBA site. The estimated rent will be 60% of what it would be in rental market.Now, they are actively searching for a plot at the suburbs of Zagreb, an informal housing area with Roma communities with which they try to build ties through common activities. Their plan is to build a new construction of about 55 people and 19-20 housing units of various typologies, individual and coliving apartments and 15% communal spaces. Their funding is going to be 10% non-refundable grants for the research, 10% members’ contributions, 30% MOBA funding and the rest 50% loan from ethical bank.

Through the years they have built a strong network of collaborations with other relevant civil society organizations to both advocate the idea of cooperative housing and implement the project. Their latest collaboration is with the University of Kragujevac on energy issues and with a technical construction company on prefab prototypes, which will further elaborate their proposal as a pilot project and housing prototype for Serbia.

The idea of cooperative housing emerged for the members of Rákóczi Kollektíva short after their graduation from the College for Advanced Studies in Social Theory, in Budapest. The living experiences of the dormitory of the school paved the way for their exploration of communal living later on. On May 2018 they finally managed to buy their first house for 7 people and other 10 ten are in a waiting list for a second one. The house was bought with direct loans by friends without any banking interference. The lack of previous paradigms of coop housing in Hungary and the lack of collaboration with the local and central state has urged them to pursue their goals on their own means.
The house is owned collectively and directly by the residents and not through a legal form that owns the house and then shares merits of it. This is not the ideal form that they pursued but an adjustment to the realities. They also have a form of flexible equity with a small minimum amount on top of it, anyone can add according to her capabilities. With the expansion of the project, they are planning that each house will have an association and all houses will refer to an umbrella organization responsible for the facilitation, policy and advocacy work.
At the moment such an organization is PERIFÉRIA policy and research center, an alternative think tank. Two of its members are also members of Rakozsi Collective.
Other collaborations include the Solidarity Economy Center which is building a solidarity economy ecosystem in Budapest promoting collaborations between various initiatives. The other is the Gólya  cooperative which is also going to buy the second house as a more trusted entity to the banks. Gólya,  through its construction branch, is going to initiate a renovation cooperative, renovating private apartments and then renting them out at a lower price, as a more prompt solution to the issue of housing.

Zadrugator started as an informal group of students, sociologists at most, in 2014 and was registered as a housing cooperative in 2016. In 2016 there was collaboration with the Faculty of Architecture that resulted in an exhibition that gained big media attention. This was followed by a big conference on “Housing Cooperatives. An opportunity for Slovenia” that attracted hundreds of audience and kicked off the project. Zadrugator is introduced as housing cooperative, but their strictly legal form is a cooperative and social enterprise, a combination that provides protections against speculation according to the Slovenian Law. They want to develop a rental cooperative housing project on land leased by the municipality so as to make the project more affordable. There is a good relationship with the municipality of Ljubljana and with the Public Housing Fund that provided a piece of land to Zadrugator to develop and build their pilot project. The building is going to have 32 apartments for about 110-115 people of varied income, age etc. There are also going to be clusters apartments for the elderly, for which they work in cooperation with a pensioners’ group. Their goal is that the model and the tools they develop will also be applicable in other Slovenian cities with quite different housing issues and for this they have been already invited by other municipalities to develop relevant proposals.
The most challenging issues are the lack of national legislation that would allow the municipality, despite their intention, to provide the land for free or for a lower price and the lack of funding mechanisms, like ethical banking, for cooperatives. Beyond the pilot project’s development, the group has been being a leading political voice for housing in Slovenia, doing a lot of advocacy work to change the law, so as to introduce favorable conditions for housing cooperatives. Unfortunately, the draft law proposal that they managed to work out was overthrown overnight with the change of government in 2018. Since then they develop their pilot, incorporating in the contract the possibility of a future change of the law, aspiring that their model will be replicated in other cities too.

Sdílené domy (Shared Houses, Prague) started as a group in 2015. The first idea came two years earlier when they attended a Mietshäuser Syndikat presentation in Prague. As they already lived in shared flats they thought this way of life was more suitable for them. Knowledge exchange trips at Willy* Fred, Linz and ProjektHaus, Potsdam, helped them formalise the idea and shape out its basic elements. Trying to replicate the legal structure of Mietshäuser Syndikat in the legal context of Czech Republic was quite challenging for them and they reached 2019 to finally register as a social cooperative. Their legal structure is based on a combination of two forms- the association Sdílené domy that will serve as an umbrella organization and a social cooperative for the residents of each future house project. The association is also member of the cooperative with a share of 25%.
They pursue funding through a bank loan (60-80%), or through smaller foundations that are more accessible than banks. For the rest 20-40% they rely on direct loans from a close circle of friends that trust the idea and on crowdfunding for the implementation of a “public space” in this first housing project, through which they want to achieve a broader reach rather than simply being another housing project.
They have not any other institutional support from the State or the municipality, since the latter is pursuing its own form of top-down cooperative housing.
When the first house is purchased they aim to go public through public campaigns and also to scale-up supporting other groups that have already expressed interest to this type of bottom-up cooperative housing.

UPDATE: In May 2022, Sdílené domy managed to buy their first house, being the first project in MOBA network to leverage MOBA funding